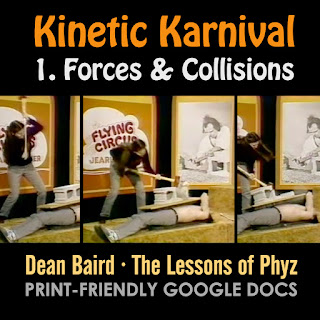 Before Jearl Walker became the current author of the famed Fundamentals of Physics by Halliday, Resnick, and Walker, he was a pioneering popularizer of physics, even appearing on The Tonight Show with Johnny Carson. He authored "The Amateur Scientist" for Scientific American and the classic, The Flying Circus of Physics — With Answers. [The Flying Circus of Physics (without answers) was published and can probably be found by skilled book hunters.
I was a fan of Walker and his work when I walked into my classroom for the first time. So when I saw that The Kinetic Karnival of Jearl Walker, filmed, produced, and broadcast just a few years prior was available for purchase, I directed my school budget to do so.
As is my wont, I cannot show videos in my class without engaging question sets for students to complete while watching. When remote teaching/distance learning (RT;DL) went into effect, I revisited the question sets and reconfigured them in Google Docs format.

FORCES & COLLISIONS [Episode background by Jearl Walker]
Often we face the possibility of a force hurting or killing someone. The force might be in a car accident, a fall on slippery ice, or an absent-minded walk into the edge of a door. This show studies the size (or strength) of such forces in collisions. The show opens with several stories about people surviving tremendously long falls. I can injure myself with a fall in the bathtub [many people die this way each year], yet some people have managed to walk away unharmed from a fall of several thousand feet. How have they survived? In "street language," their collisions with the ground have somehow been cushioned, but what does that mean in scientific terms?

Karate is a beautiful blend of timing, strength, and an intuitive feel for the force in a collision. People skilled in karate can perform remarkable feats of strength, such as breaking boards and bricks. However, strength is really not essential. In the show I demonstrate how bricks are broken, but I am far from being strong.

The show ends with two demonstrations involving me sandwiched between two beds of nails. In the first demonstration, two people step up onto the sandwich. Although my skin is not pierced in this demonstration, the stress limit is close--if the people were to jump up and down, I would be skewered.

The second demonstration is the most dangerous stunt I ever do and I should caution that you should never attempt it. A concrete block on top of the bed is smashed by a sledge hammer. The impact of the sledge hammer is governed by the same relationship between change in momentum and time for collision that I introduced earlier in the show. The force in the collision between the sledge hammer and the block is somewhat lower than the value that can cause serious injury to me. Although one can easily calculate the stress on each nail during the smashing of the block, the effect of the shock wave sent through my body is somewhat more difficult to determine. It is the shock wave, not any puncturing by the nails, that could prove fatal.