Each Bundle of Phyz is potentially a living organism. Lessons might be modified if I think of something, and new lessons might be added at any time. But for now, this is the state of the bundles. (I was assembling them one at a time, so looking back at the bundle of 21 bundles was a little surprising.)
When you're preparing your unit on any of these topics, take a peek and see if there's a lesson you can use. Or grab the complete bundle for maximum flexibility.
MOTION — INERTIA — FORCES — GRAVITY
MOMENTUM — ENERGY — ROTATION
FLUIDS — HEAT AND THERMO
ELECTROSTATICS — ELECTRIC CIRCUITS — ELECTROMAGNETISM
HARMONIC MOTION — WAVES AND SOUND
LIGHT AND COLOR — REFRACTION — MIRRORS AND LENSES — WAVE OPTICS
ATOMIC PHYSICS — NUCLEAR PHYSICS
STARS AND THE BIG BANG
at June 29, 2022 No comments:
Email ThisBlogThis!Share to TwitterShare to FacebookShare to Pinterest
Labels: Teachers Pay Teachers TPT

Secrets of Size: Atoms to Supergalaxies 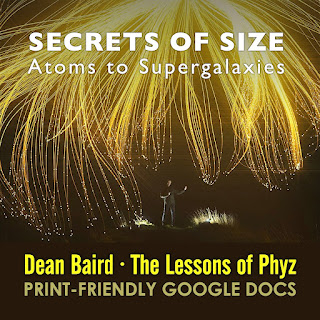 What would the universe look like if you were a billion times smaller or a billion times bigger? In this mind-bending series, Jim Al-Khalili will look at the universe across its vast range of size, ranging from the tiniest objects measuring just a few atoms, to vast structures consisting of hundreds of thousands of interconnected galaxies. Investigating these astonishing objects will reveal fundamental truths about our universe. At the end of each film, the audience will see the largest structures ever discovered in the universe and the smallest objects whose images scientists have managed to capture to date.
This series premiered on BBC Four in May, 2022. These question sets only have value if you can find and show the episodes. Until this miniseries makes it to, say, Amazon Prime via Spark or some such, you may need to be resourceful to access it. If you intend to assign it outside of class, make sure students will be able to access it.
Read more »
at June 10, 2022 No comments:
Email ThisBlogThis!Share to TwitterShare to FacebookShare to Pinterest
Labels: Astronomy, BBC, Biology, Chemistry, Engineering, Physics, Prime Video
Newer Posts Older Posts Home
Subscribe to: Posts (Atom)