Shock and Awe: The Story of Electricity

Until recently, electricity was seen as a magical power. It could slay the living, revive the dead, and bend the laws of nature. It is now the lifeblood of the modern world, fueling our lives and underpinning every aspect of technological advancement. Without it, we would be lost. Professor Jim Al-Khalili tells the electrifying story of our quest to master nature's most mysterious force.

Al-Khalili takes us on a journey from the pioneers of electrostatic demonstrations to the age of electromagnetic waves. It's a human story of the history of electricity, with twists and turns I did not know.

Shock and Awe: The Story of Electricity on Teachers Pay Teachers 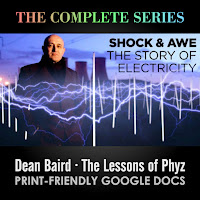 E P I S O D E S
1. SPARK
This episode presents a nice history of early electrical devices and practitioners. Professor Jim Al-Khalili tells the story of our quest to master nature's most mysterious force - electricity. Episode one tells the story of the very first `natural philosophers' who started to unlock the mysteries of electricity. They studied its curious link to life, built strange and powerful instruments to create it and even tamed lightning itself.
Read more »
at December 12, 2021 No comments:
Email ThisBlogThis!Share to TwitterShare to FacebookShare to Pinterest
Labels: BBC, Physics, Teachers Pay Teachers 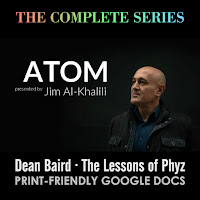 The story of the discovery that everything is made from atoms, one of the greatest scientific breakthroughs in history, and the brilliant minds behind it.

1. CLASH OF TITANS
The modern understanding of the atom unfolded in the early years of the twentieth century. Baffling discoveries made by ingenious experimental scientists challenged the foremost theoretical physicists of the era. Rival factions fought over competing models. The players were human, with human strengths and weaknesses. Hard-fought victories were matched by crushing defeats. At the end of it all, a contemporary model of the atom emerged. Heads up: the expletive abbreviated “BS” is uttered in this episode.