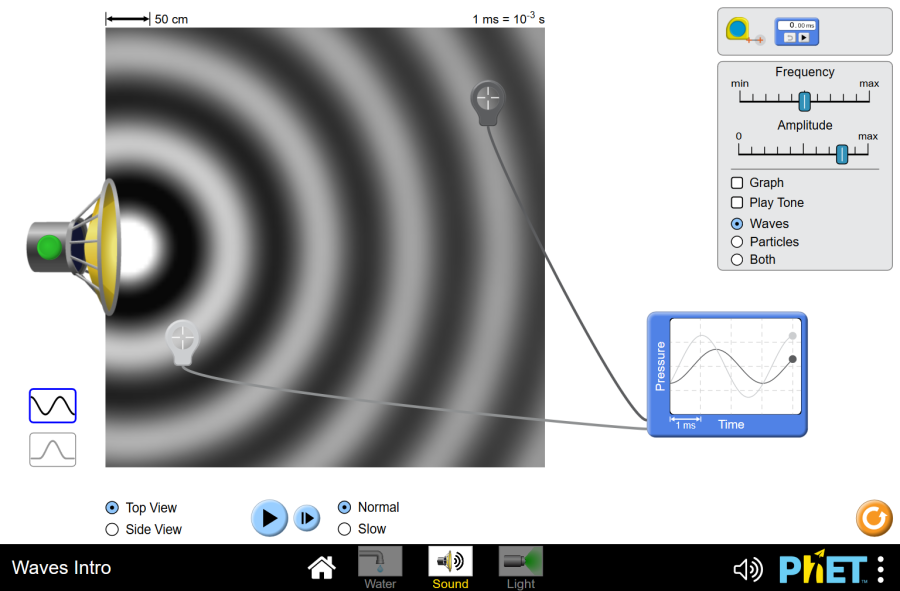 The PhET program at the University of Colorado/Boulder has been making quality simulations since the 1990s. I don't recall the exact details of when I started crafting activities around them. But I know I chose to work PhET-based activities into my Conceptual Science lab manuals because I could count on them being universally accessible, free of charge.
When PhET ported its legacy Flash and Java sims into HTML5, some characteristics of the sims changed. Some of the changes broke some of the activities I had written for the original simulations.
Once upon another time, Pasco Scientific produced and developed an application called DataStudio. It's primary purpose was to monitor and process data from Pasco's sensors. But it also had a sound creation and monitoring capability called Waveport. Pasco reimagined its data processing software when it developed Capstone and Spark. Data monitoring was improved. But sound capabilities were left behind. I was a big fan of Waveport and have yet to find a suitable replacement.
Here are the activities I've written for sims involving waves and sound.
Water Waves in an Electric Sink [Mechanical Waves] on Teachers Pay Teachers
Originally developed using PhET's original Wave Interference sim, this now can now also use PhET's Waves Intro sim. I use this as a classroom activity. At certain points during the period, I will interrupt the students with discussions of what they've learned so far. This activity is included in the Conceptual Physics 12th edition lab manual at Pearson.
High Quiet Low Loud [Sound Waves] on Teachers Pay Teacher
Using PhET's Waves Intro sim, investigate the differences between high and low sounds and loud and quiet sounds in terms of wave properties.
Wah-Wahs and Touch-Tones [Beats and Superposition] copy from my Google Drive
This activity was built around Pasco's DataStudio Waveport interface. That software has been discontinued. I was able to continue using it in Mac OS X 10.14 Mojave, but 10.15 Catalina won't run it. So macOS 11 Big Sur and macOS 12 Monterey are no go, too. If you know of something that matches its functionality and still works, let me know in the comments. This activity is included in the Conceptual Physics 12th edition lab manual at Pearson.
at August 01, 2015 No comments:
Email ThisBlogThis!Share to TwitterShare to FacebookShare to Pinterest
Labels: Pearson, PhET, Physics
Newer Posts Older Posts Home
Subscribe to: Posts (Atom)