Darren Aronofsky and Will Smith teamed up in 2016 for National Geographic's One Strange Rock. For that series, US astronauts offered their perspective on the home planet while the storyline focused on the things that make life possible and enduring on Earth. The photography is stunning. The locations and people are captivating. And the astronauts hold the narrative together, along with Will Smith. I created questions sets for all the episodes. To me, the mix of earth science and biology made One Strange Rock a natural fit for the NGSS course, The Living Earth.

Sources on the Internet indicated that a second season had been green lit. But ... crickets ... then the pandemic. I had given up by the time promos appeared. Seems like I only knew of it weeks before Welcome to Earth premiered on Disney+.

In this series, Will Smith wants to be an explorer. A team of explorers take him to the ends of the earth and beyond. Aronofsky's cinematographers continue to shine. Most episodes clock in at 40 minutes or less (episode 1 is 44 minutes). The academic content is less dense than it was in One Strange Rock. The unexpected bonus is great representation, including a blind wilderness explorer and an agile amputee. 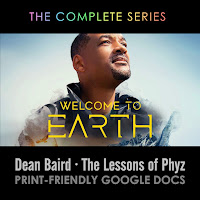 1. THE SILENT ROAR
On a remote island in the Pacific, Will Smith descends into the heart of an active volcano to investigate sounds beyond human hearing. Will discovers that everything on our planet creates its own unique sound—even if we can’t always hear it. With the help of technology, we can tune into the hidden sounds of our planet, from the pull of the moon on our mountains and cities to a silent rumble so deep and powerful, it can move the earth around it.