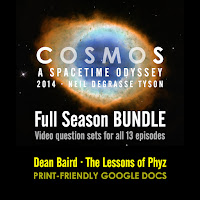 E P I S O D E S
1. STANDING UP IN THE MILKY WAY
Tyson opens the episode to reflect on the importance of Sagan's original Cosmos, and the goals of this series. He introduces the viewer to the "Ship of the Imagination", the show's narrative device to explore the universe's past, present, and future. Tyson takes the viewer to show where Earth sits in the scope of the known universe, defining the Earth's "address" within the Virgo Supercluster. Tyson explains how humanity has not always seen the universe in this manner, and describes the hardships and persecution of Renaissance Italian Giordano Bruno in challenging the prevailing geocentric model held by the Catholic Church. To show Bruno's vision of the cosmic order he uses an animated adaptation of the Flammarion engraving, a 19th century illustration that has now become a common meme for the revealing of the mysteries of the Universe.

The episode continues onto the scope of time, using the concept of the Cosmic Calendar as used in the original series to provide a metaphor for this scale. The narration describes how if the Big Bang occurred on January 1, all of humankind's recorded history would be compressed into the last few seconds of the last minute on December 31. Tyson concludes the episode by recounting how Sagan inspired him as a student as well as his other contributions to the scientific community.