A Bundle of Phyz: HEAT + THERMO 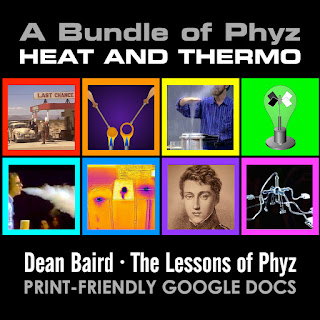 The bundle opens with a virtual demonstration of thermoscopes and a discussion of temperature scales. Next we have the classic ball and ring thermal expansion demonstration guide, followed by a demonstration to see the difference between hot and cold in a couple of ways.
The Mechanical Universe's "Temperature and the Gas Laws" is up next, followed by Conceptual Physics Alive's "Heat, Temperature, and Expansion".
To explore heat transfer, there's the "Conductivity Spider" demonstration guide (that could be used with a heat conductometer), Paul Hewitt's "Heat Transfer," my own "Radiometer" (really an infrascope) demonstration, and Hewitt's "Heat Radiation". The "Miracle Thaw" virtual demonstration ties up the heat transfer topic nicely.
Jearl Walker's Kinetic Karnival episode, "The Leidenfrost Effect" is arguably his best work on video. While he cannot prepare a crêpe on an iron, he manages to plunge his hand into molten lead and pour liquid nitrogen into his mouth. He deploys physics to win a bar bet before walking across burning coals.
Next up is Hewitt's "Heat: Change of Phase," a fascinating topic in thermal physics largely abandoned in recent years. Might work well for an emergency sub plan.
On to thermodynamics with The Mechanical Universe episodes, "The Engine of Nature" (Sadi Carnot and the heat engines) and "Entropy" (ft. the adult beverage experiment intended for mature audiences only).
We end in the realm of cold. The Mechanical Universe's "Low Temperatures" is followed by a two-part PBS NOVA/BBC collaboration, "Absolute Zero". Part 1 is "The Conquest of Cold," and part 2 is "The Race for Absolute Zero". It's a thorough telling of low temperature research and of the very human researchers involved.
A Bundle of Phyz: HEAT + THERMO at Teachers Pay Teachers
All resources are available separately. All are Google Docs files on Google Drive. All include answer keys.
at April 07, 2022
Email ThisBlogThis!Share to TwitterShare to FacebookShare to Pinterest
Labels: BBC, Book of Phyz, Conceptual Physics Alive, Kinetic Karnival, Mechanical Universe, NOVA, PBS, Physics, RT;DL Virtuals, Teachers Pay Teachers