Annenberg CPB · 1987 · Presenter: David Goodstein
The Mechanical Universe...and Beyond is a critically-acclaimed series of 52 thirty-minute videotape programs covering the basic topics of an introductory university physics course. The series was originally produced as a broadcast telecourse by the California Institute of Technology and Intelecom, Inc. with program funding from the Annenberg/CPB Project.
Each program in the series opens and closes with Caltech Professor David Goodstein providing philosophical, historical and often humorous insight into the subject at hand while lecturing to his freshman physics class. The Mechanical Universe contains hundreds of computer animation segments, created by Dr. James F. Blinn, as the primary tool of instruction. Dynamic location footage and historical re-creations are also used to stress the fact that science is a human endeavor.
The series has been broadcast as a telecourse over the PBS television network and can still be seen on many PBS stations. The Mechanical Universe is arguably the most successful attempt to date to use video technology in the presentation of rigorous physics instruction.
Index of all episodes of The Mechanical Universe: College Editions and High School Adaptations. 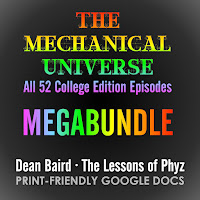