Master teacher Paul Hewitt teaches noncomputational Conceptual Physics. Observe Hewitt teach in a classroom with real students, using engaging demonstrations and artwork.
Years ago, I found myself serving jury duty during my unit on waves. I had the substitute show the Mechanical Universe episode on waves, and a Conceptual Physics Alive episode on waves. When I returned, I asked my students which video they preferred. To my surprise, they preferred Hewitt's videotaped classroom lecture over the slickly produced television program. That's not to take anything away from the massive accomplishment that is The Mechanical Universe. Rather, it speaks highly of Hewitt's extraordinary ability to connect to students.
Conceptual Physics Alive on Teachers Pay Teachers 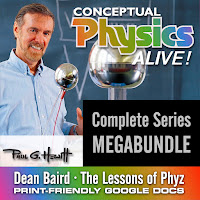 Set 1: Motion
1. INTRODUCTION
Author Paul Hewitt describes the perspective taken in the Conceptual Physics program and offers a preview of things to come. The program begins with a description of how the video series came to be. Enjoy the clips from the “old days” going all the way back to 1974!