When I was in 4th grade, our class would take trips to the school library. And we were allowed to check out books. I believe this might have been a privilege reserved for those of us in "upper elementary" (4th-6th grade). My teacher, Mrs. Murphy, noticed that I had become especially enamored of a book about the planets. I believe it was a small (maybe 6"x9") dark blue hardcover book titled The Planets.
And yes, I was transfixed. Other worlds that orbited the sun. Earth was not alone in the universe. There were other worlds! In the mid-1970s, the planets of our own solar system were the only planets we knew to exist. Maybe there were planets orbiting other stars, but maybe not. As far as we knew, there were nine planets (Pluto was a planet in those days).
I checked out the book, and checked it out again when it was due back, and checked it out again after that. Speed reading was not my thing. And I'm sure I just kept re-reading pages I had already read.
Mrs. Murphy suggested that I write a report on The Planets and I (the future physics teacher) readily agreed. Talk about pushing on an open door!
Using dad's collection of Flair felt-tipped pens, my report devoted one page to each planet. Each page had a partial diagram of the solar system, showing the orbits of all the planets, but showing the specific page's planet in its orbit on that page. Graphics and art were important. The remainder of the page was a list of the planet's parameters: distance from the sun, diameter, mass, and such. The pages were bound by binding rings. Very polished.
And it earned an A++ from Mrs. Murphy. Mind you, no one else in the class had been asked to do anything like this. I was flying solo on this project.
I recently reconnected with Mrs. Murphy and she's a total delight. Full of energy and as sweet as could be.
In any case, I thought of the report and Mrs. Murphy as I watched the BBC/PBS-NOVA miniseries, The Planets. It originally aired a few years ago, but somehow got past me. Now that I'm crafting question sets to accompany science documentaries, it was high on my priorities.
It turns out that post-Voyager and other probes, we know a whole bunch more about the  planets than we did in the early '70s. So I learned a bunch.
Your students can learn a bunch, too. They live in a galaxy festooned with thousands of known planets orbiting stars far and farther. And in a solar system in which Saturn is not the only planet known to harbor rings.
THE PLANETS 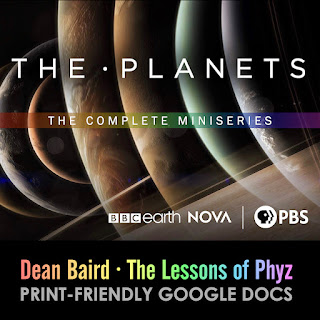 Among the stars in the night sky wander the eight-plus worlds of our own solar system—each home to truly awe-inspiring sights. Volcanoes three times higher than Everest, geysers erupting with icy plumes, cyclones larger than Earth lasting hundreds of years. Each of our celestial neighbors has a distinct personality and a unique story. In this five-part series, NOVA will explore the awesome beauty of “The Planets,” including Saturn’s 175,000-mile-wide rings, Mars’ ancient waterfalls four times the size of any found on Earth, and Neptune’s winds—12 times stronger than any hurricane felt on our planet. Using unique special effects and extraordinary footage captured by orbiters, landers and rovers, we’ll treat viewers to an up-close look at these faraway worlds. We’ll stand on the dark side of Pluto, lit only by the reflected light of its moons, watch the sun set over an ancient Martian waterfall, and witness a storm twice the size of Earth from high above Saturn. And, we’ll reveal how each of them has affected our own planet: Earth.
As of the publication of this resource, The Planets was available via PBS streaming, Amazon Prime Video, AppleTV, and on DVD and Bluray.
The Planets at TPT

1. INNER WORLDS
The four planets closest to the sun, called the rocky planets, were born from the same material in the same era. But they couldn’t be more different: Tiny Mercury is the runt of the litter, almost like a moon. Venus is devilishly hot, and Mars is a frozen desert world. Only on Earth do we find the unique conditions for life as we know it. But why only here? Were Earth's neighbors always so extreme? And is there somewhere else in the solar system life might flourish?
Participants include Carrie Anderson, Nancy Chabot, Brett Denevi, David Grinspoon, Johnathan Lunine, Larry Nittler, Lynnae Quick, Lynn Rothschild, Suzanne Smrekar, Anjali Tripathi.
2. MARS
The Red Planet was once a vibrant blue water-world, home to raging rivers, active volcanoes, and even an ocean. But as the young planet’s core cooled, its magnetic field and protective atmosphere faded, eventually exposing it to the wrath of the sun. With its volcanoes extinguished and its water lost to space, Mars became the frozen desert planet we know today. But if it once had many of the ingredients necessary to form life, how far along might that process have gotten?
Participants include Jennifer Eigenbrode, John Grotzinger, Bruce Jakosky, Nick Lane, Steve Squyres, Leslie Tamppari, and Ashwin Vasavada.
3. JUPITER
Jupiter is not just the oldest planet orbiting the sun—it’s also the largest. So when the young gas giant went on a rampage through the inner solar system, it shaped the fate of everything in its path. Speeding towards the Sun, Jupiter’s massive gravitational force hurled debris into interstellar space, stunting the growth of would-be planets. Earth might have been doomed had Saturn not pulled Jupiter back. Today, Jupiter resides in the outer solar system, where its gravity bends the paths of asteroids and stokes volcanic activity on its moon Io. But it could one day wreak havoc again.
Participants include Fran Bagenal, Konstantin Batygin, Heidi Becker, Steve Desch, Bethany Ehlmann, Leigh Fletcher, Andrew Ingersoll, Derrick Pitts, Lynnae Quick, Edgard Rivera-Valentín, and Bruce Schumacher.
4. SATURN
Over the past 40 years, a handful of space probes has given us glimpses of Saturn. But NASA’s Cassini, which explored the gas giant’s realm for 13 years, delivered the most breathtaking new insights. NOVA takes you inside Cassini’s epic journey as it makes stunning discoveries: Saturn’s rings are younger than the dinosaurs and may be remnants of an ice moon. And geysers erupting ice and gas on the moon Enceladus show that it could have all the ingredients for life. But to protect it, the Cassini mission team makes a bittersweet decision.
Participants Kevin Baines, Shawn Brooks, Jeffrey Cuzzi, Michele Dougherty, Leigh Fletcher, Johnathan Lunine, Carl Murray, Robert Pappalardo, Carolyn Porco, Edgard Rivera-Valentín, Linda Spilker, and Julie Webster.
5. ICE WORLDS
Over a billion miles from the sun, beyond the rocky inner planets and the gas giants, lie the ice words—Uranus and Neptune. NOVA takes you inside the missions that rewrote the story of the outer solar system: NASA’s Voyager 1 & 2 capture Neptune’s supersonic winds, and rings around a tipped-over Uranus. And when New Horizons flies by Pluto in 2015, it reveals jagged ice mountains and an underground ocean.
Participants include Fran Bagenal, Leigh Fletcher, David Grinspoon, Noah Hammond, William McKinnon, Cathy Olkin, Derrick Pitts, Edgard Rivera-Valentín, John Spencer, Alan Stern, and Hal Weaver.